The Blender boasts six inputs and four headphone outputs, with a focus on integrating hardware and software together for a seamless creative process. In essence, it’s a condensed version of the now defunct Jamhub, with 3.5mm input and output sockets instead of XLR or TRS jacks. It’s a shame that TC Helicon didn’t include any cable tip adapters with the unit, which would instantly accomplish a true “plug-and-play” experience right out of the box. The device can be powered with the included wall wart, or with four AA batteries. 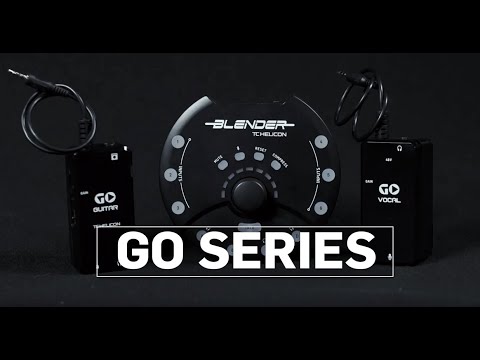 Aesthetically, the Blender resembles a hybrid of an oversized hockey puck and a flying saucer. The device is astonishingly light and feels almost on the cheap side; mainly due to its fully plastic exterior. However, with that in mind, the build quality and components used are still satisfactory. The tactile rubber buttons have a satisfying response and are backlit with bright LEDs, which even notify the user if input levels are clipping. Volume levels are controlled by the large rotary encoder in the centre, which glides smoothly without conflict. Finally, a handful of solid rubber feet on the base of the unit ensures slip-free usage on any surface.

Where the Blender particularly excels in is its functionality – arguably the most important part of any device. Each individual user is able to set their own mix levels from all six outputs. The controls are incredibly intuitive; a simple button press selects between headphone outputs, and the levels are subsequently controlled through the rotary encoder and input buttons. Band members can even create their own personalised mix using their smartphones and Blender’s free mobile app, eliminating the need to gingerly tiptoe over long trails of cables. The connecting process is remarkably simple and pain-free: one user connects to the Blender, creating a session of sorts, and the rest of the band can then simply join the Bluetooth network created instead of having to individually link to the device. The app’s interface is beautifully laid out and organised. Its controls are responsive and even allows users to assign instrument icons to different input channels for quick recognition.

The global controls located on the Blender are equally useful and pragmatic. A mute button kills all signals, while a compress function adds a special mastering tinge across all connected instruments; low signals are boosted, while the top levels are compressed. Holding the reset button allows you to quickly revert all customised settings and levels back to factory defaults, presenting a fresh canvas for a new jam session. Last but not least, a talk button allows the onboard omnidirectional mic to broadcast voices across all headphone outputs – perfect to cut through to overenthusiastic band members still bashing away. The Blender records at a high sample rate of 192kHz and is a perfect fit for any compatible DAW or similar. It can even be directed straight into an iPad running Garageband with a micro-USB to lightning adapter. Sound quality is excellent across the board – clarity is no issue whatsoever. Overall, there are little complaints here. The Blender performs as advertised, and is arguably the perfect gateway into silent room recording and jamming.